HEY, I AM A JEW! – Positive feedback 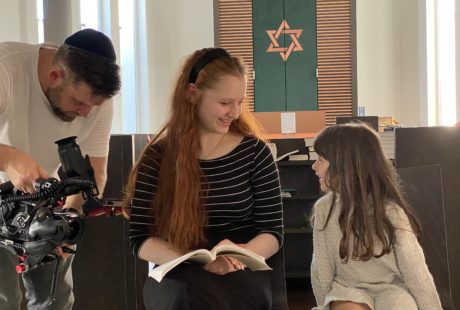 In the documentary HEY, I AM A JEW! eleven young Jews between the ages of 12 and 25 talk about their everyday life, their religion, their hopes and dreams, about anti-Semitic experiences and annoying clichés.

The film was broadcast on 9 November 2020 as part of a ZDF theme evening and can be seen online until 6 September 2021.

I am very grateful for the positive feedback our documentary has received. Here is a small selection:

“Despite all seriousness on the subject of anti-Semitism, situation comedy and humour are not lacking, thanks to the interviewees and one or two cuts of the film material. At the beginning, for example, when some of the young people report about sometimes absurd inhibitions in their environment to speak the word ‘Jew’. ‘Yes, I am Jewish. And now, do you want a biscuit?’, asks 18-year-old Nika from Osnabrück. (…) The successful documentary, accompanied by varied music, will be broadcast on 9 November, the day on which the November pogroms of 1938 against Jews are remembered.”
-Jüdische Allgemeine

“The way the director and the camera manage to create closeness to the twelve young protagonists here is admirable. Not a word of an ‘explanatory’ comment disturbs the encounter with them, so that we get the impression that someone is speaking out here without the blinkers of a public that so likes to put everything Jewish on the pedestal of the tragic. Snappy cuts bring the young people together, make them seem like a family, while the camera is also interested in interiors and places where their lives take place: Living corners with the cinnabar that has accumulated there, cafés, empty school rooms and corridors, a sports hall, a lake, a playground. The personal view produces little stories instead of statements, living people instead of ‘talking heads’. (…) In its informality, the documentary stands out from the relevant TV programmes and sets standards for future considerations of this kind.”
-epd medien, Christian Deutschmann

“Jan Tenhaven’s film shows in particular how varied and lively Jewish life is. It also deals with experiences of exclusion and discrimination in German society. A recommendable film for all those who want to learn more about Jewish life today, introduced by young, interesting people. Film tip for the weekend!”
-Anne Frank Zentrum Berlin

“Be sure to watch!”
-Katharina von Schnurbein, European Commission Coordinator on combating antisemitism and fostering Jewish life (via Twitter)

“There is no talk here about Jews. Here are Jews talking.”
-Sigmount Könisgberg, Anti-Semitism Officer of the Jewish Community in Berlin (via Twitter)

“This film really shows many smart, young Jewish voices. A refreshment (…) Thanks to Jan Tenhaven for that.”
-Volker Beck, The Greens (via Twitter)